A suspect device has been found in the Great Hall at QUB.

A bag was found during Vice Chancellor Patrick Johnston’s address to international guests with expertise in pharmaceuticals.

It is believed the bag may have been left by a cyclist.

After The Gown tweeted details of the incident our reports were confirmed by an attendee. 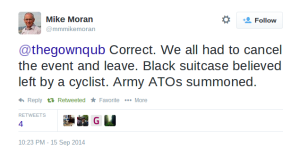 NI21 MLA Basil McCrea was present at the event.

As of 9.30pm the gates were locked and all entrances of the Lanyon were being manned by security with no one being permitted to enter the quad area. The PSNI were present.

More on this story as it develops.