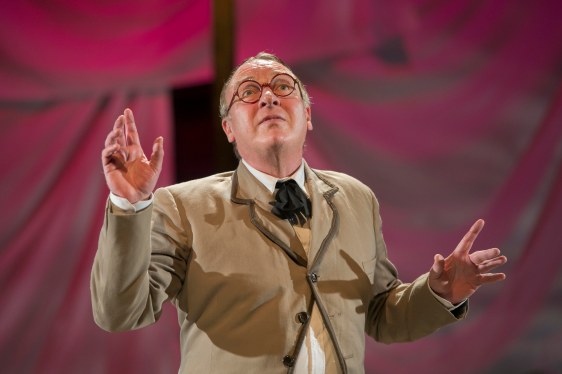 On March 11th, God Bless the Child will begin its run on the Lyric Theatre’s Danske Bank stage. Director and producer Patrick Talbot has adapted a number of short stories by Cork born writer, Frank O’Connor to create a stage show equally comical and moving. Drawing on three of these stories in particular, ‘My Oedipus Complex’, ‘The Genius’ and ‘First Confession’, Talbot has produced what the Irish Examiner has dubbed “a highly entertaining adaptation of three of O’Connor’s funniest stories”.

God Bless the Child introduces audiences to Michael, Larry and Jackie. We follow Michael as he goes into mortal combat with his father when he returns from the First World War. Larry is presented as a genius who can’t understand why the world can’t keep up with him while Jackie has the grim task of preparing to make both his first confession and communion. His situation is made worse still as he must simultaneously deal with a very obstreperous grandmother.

God Bless the Child has already proved successful in O’Connor’s birth place; the play premiered in Cork city last year to packed out audiences. In regards to the plays previous success, Talbot has stated; “the reactions we had were terrific, people have really enjoyed the way these wonderful stories have come to life on stage; Frank O’ Connor’s writing is so deliciously insightful. And now we’re very excited to bring the production to Belfast. It’s an entertaining and uplifting night of theatre.”

Richly evocative of Ireland in the early decades of the 20th Century, God Bless the Child is funny, moving and will feature memorable from an all-star cast: Ciaran Bermingham (Game of Thrones, Killnaskully, Bittersweet, and The Tudors), Shane Casey (The Republic of Telly, The Wind That Shakes the Barley) and Gary Murphy (Love/Hate, The Tudors, The Clinic, Ripper Street, Moone Boy, and The Vikings) take to the stage to enact Talbot’s vision of O’Connor’s short stories in a unique way.

God Bless the Child will be a performance which can be enjoyed by audiences of all ages. The play will run from 11th-21st March in the Lyric Theatre. Ticket prices will range from £18-£22. All Danske Bank card holders are entitled to 20% discount off tickets for all Lyric productions on the Danske Bank Stage.