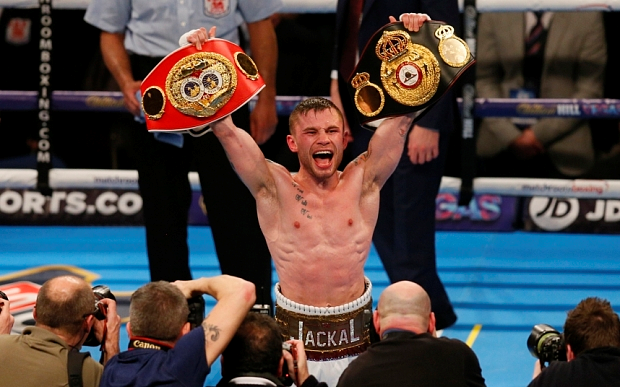 The Tiger’s Bay native showed the heart of a lion and the craft of a fox as he outclassed the Bury brawler over twelve rounds in the Manchester Arena.

After four years of hype and banter between the two fighters and their camps, on Saturday night Carl Frampton and Scott Quigg finally collided in the middle of the ring to settle their differences. In previewing the fight: entertainment was always guaranteed. Firstly, the fight staged another episode of the ancient rivalry between Ireland vs England. Secondly, tensions were further fuelled as Frampton was not only setting out to defeat his opponent, but his former promoter, Eddie Hearn, and trainer, Joe Gallagher. Thirdly: if, somehow, the long awaited bout was not enough to lure boxing fans from all corners of the earth, both men also brought their titles to the table, adding that extra bit of spice. Therefore both the IBF and WBA super-bantamweight titles were on the line and the winner would unify the division.

Pre-fight press conferences were dictated with which sets of fans would be superior and which fighter would hail from the home dressing room. Frampton argued that it was his right, being the bigger act, to use the ‘star of the show’s’ changing room. Whereas Quigg argued he was the home fighter and therefore would occupy the home dressing room. All this petty hype was put to an end when Quigg was given the changing room. However, Frampton illustrated his stance on the matter from the outset stating that he was indifferent towards which changing room he prepared in. Frampton concluded the topic with the good old sporting cliché that “superstition is a sign of weakness”.

The mind games had well and truly begun.

The Ulsterman continued his mental warfare at the weigh-in when the two fighters squared off for nearly an entire minute. In the square off previous, Frampton persistently patted Quigg’s chest in a patronising manner. It was only a matter of time before Quigg reacted and he did so with a shove. This was a jackpot in ‘The Jackal’s’ eyes as he had again, stirred a reaction from the gaunt Englishman. In response, Frampton stepped forward, clutching a good scruff of Quigg’s jacket and stared deep into his soul whilst exchanging words before they were torn apart.

The fight itself has faced criticism for its dreary start. Frampton typically boxed effectively and efficiently, scoring points with his jab and evading the few attacks Quigg appeared to muster. This inability to get started in the fight is fairly common throughout different forms of combat. Many fighters blame it on nerves or simply not turning up on the night. Quigg ultimately failed to manipulate his reach advantage and failed to neutralise a fidgety Frampton. When Quigg eventually found his rhythm, he increased the tempo and took the fight to Frampton. It was later revealed that Quigg had boxed with a broken jaw for eight of the twelve rounds. Quigg described the sensation in his jaw as “numb” during the fight itself and has since underwent surgery. In showing great character and an intolerance to submit, Quigg began his uphill battle to retain the balance in the contest. However, it was a case of too little, too late as the Belfast man maintained composure and remained compact, defending himself well. Frampton continued to cruise on in the later stages, boxing intelligently and teeing off on shots when the opportunity presented itself.

Dramatically, the fight went to a split decision in favour of Frampton with one judge scoring the card 115-113 in favour of Quigg. This is a stark contrast to how the other two judge’s scored the fight as they recorded a 116-112 decision in Frampton’s favour. After the fight, Frampton eloquently serenaded his loyal travelling fans with his own rendition of “Ulster boys making all the noise”. Once again, proving that he is simply an ordinary chap from a working-class background in North Belfast, striving to fulfil his dreams whilst unifying divisions and his nation. Through showcasing hard-work, commitment, an indifference towards religious/political pressures and more importantly, a sense of humour: Carl Frampton certainly is the people’s champion and serves as a beacon of hope for the future of our nation.

However, Carl differs slightly in the sense that not every man walking around Belfast is a unified world champion. Therefore, some would say Frampton has a target on his back. This proved to be the point as after the fight big names in the boxing world formed an orderly queue to call out the Ulsterman. The likes of Guillermo Rigondeaux plastered his twitter feed after the fight attempting to provoke Frampton by focusing on Ireland’s stereotypical reputation of fighting and comparing him to UFC superstar, Conor McGregor. Again, Carl differs from the average man as he seemingly thrives on such attention from other professional fighters. Having put an end to speculation of a rematch with Quigg, Frampton proceeded to reply to Mexican featherweight champion, Leo Santa Cruz, on his own twitter, accepting his offer to a summer showdown.

The Gown Team would like to wish Carl all the best for the future, both in and outside the ring.